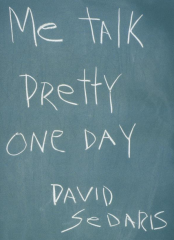 David Sedaris, like the lovely Julia Child who I quoted last week, is another America who has spent stretches of time as an expat in France. For those who don’t know him, he’s a humorist/writer who revels in the dark and absurd aspects of his own life growing up in North Carolina, and living as an adult in New York City and France.

In “Me Talk Pretty One Day” he writes about his struggle to learn French.

On making the first wobbly steps in a new language:

“Things began to come together, and I went from speaking like an evil baby to speaking like a hillbilly. ‘Is them the thoughts of cows?’ I’d ask the butcher, pointing to the calves’ brains displayed in the front window. ‘I want me some lamb chops with handles on ’em.'”

On the difficulty of memorizing the gender of nouns:

“I spent months searching for some secret code before I realized that common sense has nothing to do with it. …

“I just can’t manage to keep my stories straight. Hoping I might learn through repetition, I tried using gender in my everyday English. ‘Hi, guys,’ I’d say, opening a new box of paper clips, or ‘Hey, Hugh, have you seem by belt? I can’t find her anywhere.’ I invented personalities for the objects on my dresser and set them up on blind dates….”

Struggling to memorize Chinese characters has forced me into similar games. I’ve made up many, many silly stories to help me remember the meaning and pronunciation of characters. For example, this character:

means foundation or base. For me, the meaning was easy enough to remember, since it looks kind of like a structure balanced on a base, but I couldn’t remember the sound. So I looked at it a long time and came to convince myself that it also kind of looks like a guy being stabbed in the crotch with a sword. And, facing such pain, one thing he might scream is “ji!”

My brain is cluttered with all kinds of bizarre stories like this. Bizarre ones tend to have better “sticking power.”

But I still mix them up. For example, this character:

Is that a little tank bullying a man? And if so, what did that mean?