1. Elephants are awesome. Go to Elephant Nature Park, a heaven on earth for abused and rescued elephants.

2. Small children are highly portable, but very loud. You can check quite a few sight-seeing boxes while holding a six-year-old’s hand and carrying a 2-year-old on your back. Do take them to noisy places to help drown out the whining and screeching. 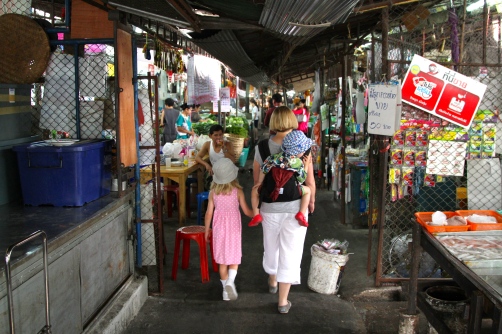 3. Both satisfying and head scratching wisdom can be found in sprinkled in the trees around Wat Phra Singh.

4. American tourists are more annoying than Chinese tourists. Or maybe it’s just that I understand every single trivial, annoying word that they say about the Green Bay Packers and the slivers stuck in their feet. (See these old posts for more background on the annoying tourist wars: Ugly American, Ugly Chinese: the tourist trap and Do expats judge their “own” more harshly?)

5. Tex-Mex should not be ordered outside of select destinations in North America. I’ve previously laughed at blue-cheese-filled enchiladas in Groningen, Netherlands. This trip I fooled myself into risking a Tex-Mex meal only to be presented with a plate of tacos covered in sweet vanilla yogurt. Because it’s the same thing as sour cream, right? Wrong. I have only myself to blame.

6. Tuk-tuk rides are thrilling. In our six-year-old’s estimation, tuk-tuk rides fall below swimming, but above elephants in the hierarchy of holiday highlights.

8. Thai massage in a mosquito-filled room is an agonizing tug-of-war between heaven and hell.

9. The groovy backpacker trek around South-East Asia is alive and well. As a former follower of the “banana-pancake-circuit” through the foothills of the Indian Himalayas, this trite sentiment seems to ring a bell.

10. There might be more Mandarin spoken in Chiang Mai than Hong Kong. We’ve seen a large number of Mandarin-speaking independent tourists in Chiang Mai. Is it all to do with the recent Chinese blockbuster comedy, “Lost in Thailand” (人再囧途之泰囧)? Regardless, it’s nice to see a shift in tourist faces.