Watching the boats bob in Causeway Bay Typhoon Shelter, I swallowed two small pink pills to combat sea sickness. With the thick smell of “harbor” in our noses — diesel exhaust, fish and petrol — we boarded the “junk.”

Day-long boat trips around Hong Kong are commonly called “junk trips” after the old wooden boats that still putt around various harbors and typhoon shelters. Despite this, many “junk trips” take place on large luxury yachts.

The weather report for the day was poor and the junk company chose a conservative destination: Clearwater Bay. Making our way swiftly past Hong Kong Island’s built-up North Point and Taikoo neighborhoods, we rounded the eastern-most edge of Kowloon and started spotting small fishing villages flying bright triangular pennants. Several of these villages were located on solid ground, but one was a purely floating village of small boats lashed together in rows.

Moments later, passing the cliff top perch of the Clearwater Bay Golf & Country Club with its perfect green lawns, reminded us that we were still in modern Hong Kong with its yawning income gap.

Setting anchor in Clearwater Bay, we goaded each other into entering in the cool, dark water that smelt vaguely of sewage. 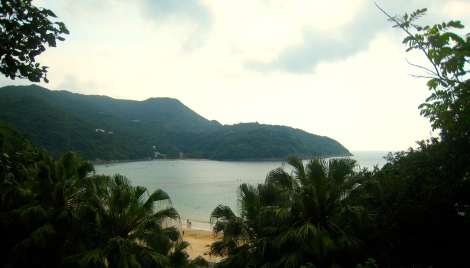 Clearwater Bay as seen from the shore on a different day out.

As we swam, dark clouds moved swiftly across the mountains and directly overhead. A succession of us swimmers scurried up the ladder and headed for cover just as the rain billowed down on us. Huddling in the weather-proof, enclosed bottom deck, we opened the wine and looked nervously at lightning sparking across the sky through the rain-coated, narrow boat windows.

Within an hour the rain had passed, leaving the surrounding mountainsides a vibrant green. The sky, while still overcast, glowed from the edges in a way that highlighted the smooth, glassy-still, black water. The two nearby public beaches were empty and there was not another boat in sight.

Feeling wonderfully relaxed from the glass of post-lunch Prosecco, my friend and I plunged off of the lower back deck. She chose a graceful dive and I a far less glamorous foot-first entry.

Swimming, I started over-thinking the shark nets that ringed the public beaches. We were on the ‘wrong’ side of those shark nets and looking into the dark sea below I couldn’t shake David Attenborough’s “Planet Earth” narration from my head: “The shark relies on surprise.” The documentary’s accompanying image of a Great White rushing up from deep beneath a seal with its jaws wide, was insuppressible.

This line of thought is ridiculous since there has not been a shark attack in Hong Kong since 1995. (See this great write-up of the shark attacks that did occur in the early and mid 1990s by Phil at Hong Kong (& Macau) Stuff here.)

But irrational shark-fear coupled with the plastic rubbish floating past, meant that further swimming lost out to another glass of wine while admiring the view off of the top deck. Old and new friends from around the world (a group of women had clubbed together to hire the boat) relaxed in swimsuits while talking about music, Ted talks, and the places we’ve lived.

Being a Bond enthusiast, my ecstasy level hit an absolute peak when Adele’s theme from Skyfall started playing on the boat’s sound system.

And I wasn’t queasy for a moment.

Image from Skyfall (Source: The Telegraph)

15 responses to “Heaven is a Hong Kong junk trip”