July 1st marks 16 years since the “Transfer of Sovereignty” of Hong Kong from Britain to the People’s Republic of China. The holiday is called “Hong Kong Special Administrative Region Establishment Day” making it the worst named holiday ever. But cryptically is the only way to deal with this politically sensitive hot potato, as a recent visit to the Hong Kong Museum of History taught me.

At my own lurching pace — faster through the stone-age fisherman dioramas and slower through the old Punti and Hakka village replicas — visiting all of the Hong Kong Museum of History’s permanent exhibit took the better part of three hours.

Soon after the “Made in Hong Kong” 1960s plastic toy displays, I hit the historic year 1997 and entered a darkened theater. A film was beginning on Hong Kong’s “Reunification” with China, an event called more neutrally the “Transfer of Sovereignty” and less neutrally the “Handover.”

The widescreen displayed three still images or film clips at a time on one theme. There was music, but it was otherwise mostly silent with key plot points noted through subtitles.

Hong Kong’s separation from and return to China is a politically sensitive topic and yet, I was still surprised enough by the storytelling angle to begin furiously writing notes in the dark.

My first impression was that the film retold Hong Kong’s history in a manner that sieved out the bright spots. What came through the filter was an often ominously dark picture of an orphaned Hong Kong lost without the Motherland. It felt like a pro-Beijing propaganda piece:

1. Hong Kong, you were taken from us. The first on-screen title, “6000 years of Chinese history; 150 years of Hong Kong,” highlighted the breadth of Chinese culture while underscoring that Hong Kong was only separated for a relative instant. A forced separation spurred by the first Opium War and the 1842 Treaty of Nanking, which ceded Hong Kong Island to the British. The words “unequal treaty,”said several times in other areas of the museum, hung in the air.

2. We, Chinese compatriots, were kept apart. The film swiftly skirts past close to 100 years of history with a reference to Sun Yat-Sen and the Japanese occupation of Hong Kong during World War II. Mao’s declaration of the People’s Republic of China in 1949 was a key pivot point that lead to Hong Kong’s even greater physically, political and mental separation from Mainland China. The on-screen title “A Fence Apart” was punctuated with a photograph of a Chinese man peering over a spiral, razor wire border fence underscoring the sad separation of China’s people.

3. Mainland immigrants to Hong Kong suffered. Even though Hong Kong and the Mainland were separated by a nearly sealed border, immigrants found a way in. A section on post World War II immigration from the Mainland to Hong Kong was titled “For Better or Worse” and featured images of poor slum children and the tremendous fire that swept through the Shek Kip Mei shantytown in 1953 rendering 53,000 mostly Mainland Chinese immigrants homeless. Hong Kong’s water shortage and a statistic about water only being available every four days, firmly underscored the “worse” aspect of “For Better or Worse.”

4. Reunited and it feels so good. The film ended after the 1997 Reunification ceremony with blooms of fireworks and the title “A Better Hong Kong.”

The message seemed to be: “Hong Kong, you were only gone a short time, it was rough for you, but isn’t it wonderful to be reunited again.”

Then I watched it again. I noted that the official title was “Sino-Hong Kong Relations from 1841 to 1997” and I suddenly interpreted the film differently. It was not a filtered out history of Hong Kong through Mainland eyes, it told of the scant and sometimes harmful relationship between Hong Kong and the Mainland through Hong Kong eyes:

1. Sigh. We always have to deal with the overflow of violent Mainland politics. Chinese politics negatively spilled over into Hong Kong. The “Riots of 1956” were sparked by pro-Nationalist attacks against pro-Communists and evolved swiftly into wide-scale looting and violence. Similarly the “Riots of 1967,” an echo of the Mainland’s Cultural Revolution, included widespread mayhem and even bombings.

2. We were given back to the Mainland and we had no say. Following the Mainland’s opening up in the post-Mao era, a film clip of a champagne toast between Margaret Thatcher and Deng Xiaoping was lingered over. Of course neither of them were Hongkongers, but their signing of the Sino-British Joint Declaration sealed Hong Kong’s fate to be handed back to the Mainland. 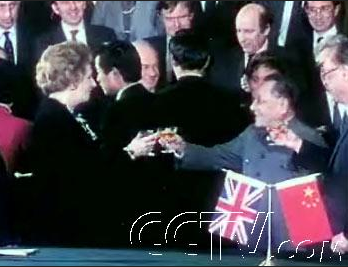 3. My God, what will become of us? The title “50 years unchanged” was written over images of booming industry and business and hinted seemingly with a sigh of relief that Hong Kong has until 2047 to be fully reabsorbed into the Motherland. However, this sentiment is dampened by reference to the Tiananmen Square Massacre, which is more safely referred to as “The June 4th Incident” in the film. Images of Hongkongers filling Victoria Park by candlelight to pay respect to student democracy demonstrators in Beijing looked like a prayer for their own hoped for democratic future.

4. Please let everything turn out ok. The film ended again of course with the title “A Better Hong Kong,” but during this watching it seemed less like a bright affirmation and more like a question or a hope.

This quiet, mainly black and white film is a triumph of fence walking. It takes a politically charged topic and presents it to the viewer either as a beautiful young woman with a feather in her hair or as a gnarled old woman, depending on the viewer’s own point of view.

The Hong Kong Museum of History is a master of illusion for successfully walking this tightrope with understated nuance.

Hong Kong as “the great Chinese experiment in freedom”

16 responses to “Psst Hong Kong: was it Handover or Reunification?”