During my summer wanders through America, one day I looked up and saw a giant mural of men with long queues down their backs and conical hats on their heads constructing a railway. Standing in the main hall of Union Station in Ogden, Utah, I was not far from where America’s transcontinental railway was completed in 1869. 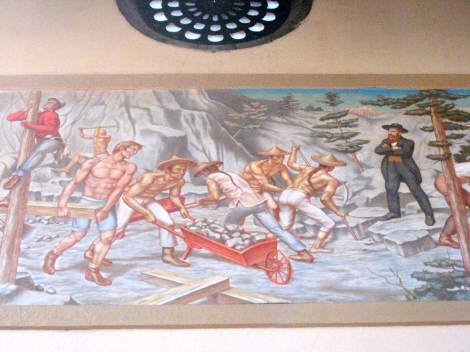 Detail of mural in Union Station 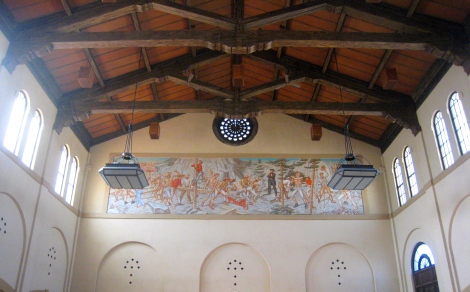 In the second half of the 19th Century, the American dream was a magnetic force that tempted many from their ancestral homes. Several branches of my own family tree, downtrodden coal miners and farmers, were tempted from England and Sweden across the Atlantic during this period.

Similarly, many from China crossed the Pacific in search of stability and work. The initial wave of Chinese immigrants arrived in the 1850s to try their luck in the Californian Gold Rush, or as they termed it: 金山, “Gold Mountain” (“gam saan” in Cantonese).

More came in the 1860s to build the Transcontinental Railway. These men–they were nearly all men–came from Guangdong Province. They were pushed by the unrest of the Taiping Rebellion and pulled by the hope of (relatively) high wages to send home to their families.

In 1864, the Central Pacific hired James Harvey Strobridge to supervise workers on the rails. He was a workaholic with a hot temper and sharp tongue — good attributes for the job. Strobridge soon learned that workers imported from the eastern states were loyal only until they were paid. Then they deserted to the gold or silver mines. The Civil War also took workers away into the military.

The Central Pacific’s leaders saw California’s Chinese population as the solution. Strobridge disagreed. He thought the Chinese were inexperienced and too small for the heavy work. But he discovered that the Chinese worked hard with few breaks and without complaining.

He later said, “Wherever we put them we found them good … If we found we were in a hurry for a job … it was better to put Chinese on it at once.”

Strobridge eventually supervised a crew of 10,000 Chinese — the largest concentration of labor in North America at the time. [emphasis mine]

A write-up that is informative, colorful and patronizing all at once.

While some of these laborers came directly from the California gold mines, others were recruited from China on a term basis and intended to return home. Some did return to China either voluntarily or forcefully (see, for example, the shameful Anti-Chinese Seattle Riot of 1886 which resulted in the ejection of 200-300 Chinese from the city). Others persevered and made new lives for themselves in America.

The Chinese railway laborers were willing to (or rather had no choice but to) work for less than European laborers. The Chinese earned $27 (later $30) per month as opposed to the $35 per month earned by Irishmen, the main alternative labor force. This wage disparity gave many established American workers’ unions fits; as they saw it, “cheap, Chinese labor” undercut their bargaining position. (Query: Since racism was also rampant, would the European laborers have been just as upset had the Chinese been paid the same wage?)

Chinese arrivals (like all arrivals at the time) increased, and in 1880 there was an ethnic Chinese population of 105,000 in America. Unions complained, people who feared the “yellow peril” complained, and America passed a hugely racist piece of legislation, the 1882 Chinese Exclusion Act, which specifically barred a class of immigrants based on race.

Everyone welcome but the Chinese. (Source: Time via The Society Pages)

As a result of the Act, Chinese men, who often initially came to America on their own, could not bring their families to a join them. Furthermore, the law restricted Chinese residents from leaving and then returning to America and barred them from becoming naturalized US citizens.

This restriction was in place until 1943, when China allied with America during World War II and the legal bar to Chinese immigration became a clear diplomatic embarrassment.

Chinese were excluded from entering American for 60 years, a period during which European immigrants hit the shores like a tidal wave. Imagine how completely different the ethnic composition of America would be today had Chinese immigration been allowed during this period? Would Panda Express have more locations than McDonald’s? Would it produce edible food? Would suburban housing developments be called things like “Hangzhou Gardens” rather than “Somerset Farm”?

The next time I’m tempted to complain about China’s opaque and ever-shifting visa policies for Americans, I’ll reflect on the 1882 Exclusion Act and be glad I can enter at all. And the next time someone talks about America’s great historic ethnic “melting pot” I’ll remember who was sharply excluded.

20 responses to “Chinese not welcome: brushing up against America’s ugly past”