My Young Internationalists in Yunnan, China

When I was seven, I lived at The Center of the Universe as a Mormon child in the American West.

I lived in Taylorsville, Utah. We rode our bikes to “The Pit,” which was an old sand and gravel mine that our new subdivision of split-entry houses had been partially built over. After riding our bikes over jumps made out of left-over construction debris and catching flying grasshoppers in the long, dry weeds, we’d bike to Circle K to buy candy cigarettes and off-brand Slurpees (7-Eleven, with real Slurpees, was forbidden as it required crossing a major arterial).

I, young Jenny Brown, lived at The Center of the Universe.

Then my family stopped attending church and I came to understand that going to the special store that sold Mormon (under) garments at Fashion Place Mall was not something that everyone in the world did as a normal errand.

We went on vacation to San Francisco and I saw skyscrapers, Chinatown, Chinese people, fresh seafood and public transportation.

Taylorsville shrank to nothing. I knew then that I had to go further.

Since then, I have gone further and I’ve been lucky enough to see a lot. Kentucky Fried Chicken in Kunming, China for example.

My own children have now also seen a lot.

They are American, but have never lived in America.

Their America is perpetually summertime, ice cream and days at the zoo.

My seven-year-old daughter lived three years with the firm belief that she was English. Here in Hong Kong she identifies as American, but she still often asks me how to say things in “Americanish,” which she defines as strictly different from “English.”

My three-year-old son was asked to wear “national dress” to his Hong Kong preschool. Great, he can just wear that red cowboy hat and cowboy boots, I thought.

I displayed the outfit and talked about America, cowboys and horses. He does not like costumes and remained unimpressed: “I Don’t Want To Wear It. I Am Not American!”

My own childish curiosity prodded me to ask: “Then what are you?”

The outfit is meaningless to him. He was born in Cambridge, UK and lives in Hong Kong. It would have meant just as much to him to wear an English Morris Dancer’s outfit, a yellow Bruce Lee jumpsuit or a fuzzy, long-haul airline blanket.

1. What is the “national dress” of the Third Culture Kid who has never lived in his/her passport country?

2. If I was so eager to leave Utah and see the world, why am I dressing my child, who has seen the world, like a cowboy?

A hypothesis: Perhaps it’s simply a sick parent-child cycle. A compulsion to dress our children in “cultural” costumes that have no touchstone in the reality of their day-to-day lives. Exhibit One (soon-to-be disillusioned me, in Taylorsville, Utah, is on the right): 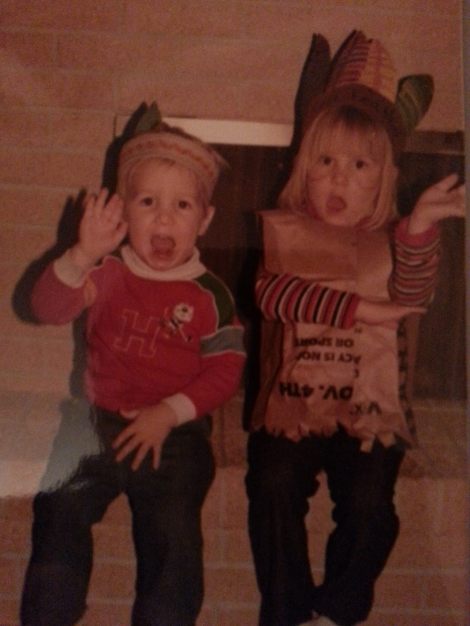 Me and my little brother in Utah dressed as “Indians.”