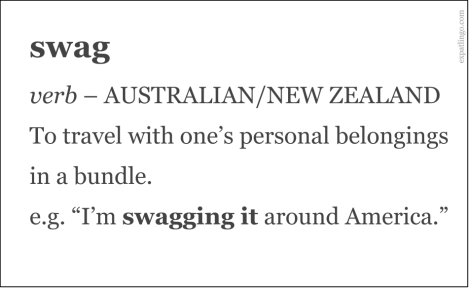 Kathleen* at Expat Alien has prompted me to investigate deeper levels of meaning for the word swag. As she noted in a post last week, “swag” generally means stuff that we get for free. As a serial expat, I was delighted to delve further down the alternative definition list and find a regional usage applicable to my present situation: “To travel with one’s personal belongings in a bundle.”

As I’m currently living between countries (in the US while moving from Hong Kong to the Netherlands), I feel very much like a nomad carrying my belongings (and my two young children) in a bundle from house to house. I’ll be “swagging it around the American West” until sometime in mid-August.

Why are both Kathleen and I thinking about swag? We’re participating in a Swag Bag Blog Hop, a lighthearted bit of blogging fun where we get to fill a virtual swag bag with desired items. The instructions are to select:

Here’s what I’d like to have in my swag bag this nomadic summer:

My bag must include the next book on my reading list: Daughters of Britannia: The Lives and Times of Diplomatic Wives by Katie Hickman (2002). It’s touted as an interesting read covering the lives of the wives of many British diplomats who’ve been stationed around the globe for the past 300 years.

As a modern expat, I’m ever so curious to read more about those who lived abroad when weeks were required to receive letters and months required to return “home.”

2. BEAUTY PRODUCT: A dentist in Utrecht

Rather than request a physical beauty product, I’d like my swag bag to include the name of a great dentist in my soon-to-be-home of Utrecht. A pre-booked appointment for a check-up and cleaning in October would be all the sweeter.

One of the biggest questions I’ve had since moving abroad in 2005 has been: Why are there no truly delicious donuts outside of North America? And more specifically for the last two years: Why aren’t donuts a food craze in Hong Kong (instead of cloying and annoyingly overpriced macaroons)?

This American summer I am fully indulging in delicious donuts and would like my swag bag to include a baker’s dozen.

The ‘old-fashioned’ donut moments before being consumed with coffee.

4. MUSIC: A running playlist to get me through

As running is my key stress reliever, I must have a running playlist in my swag bag. I’ve found this playlist to be suitable for managing the mood of my current expat transition because the music goes from melancholy navel-gazing to kick-ass acceptance in about seven kilometers:

So Lonely, The Police
Skyfall, Adele
You Only Live Twice, Nancy Sinatra
Rapper’s Delight, Sugarhill Gang
Moves like Jagger, Maroon 5
Atomic, Blondie
Can’t Hold Us, Macklemore & Ryan Lewis
Kill Bill: Battle without Honor or Humanity, from the film soundtrack
Theme from “Enter the Dragon”  (Main Title)
Break on Through (To the Other Side), The Doors

This summer of swagging will eventually end with my arrival in the Netherlands, so I’d better get my old bike back: the glorious Bakfiets. I rode this awesome Dutch bike around Cambridge for two years. It cornered like a dream and I could haul anything I fancied in it (e.g. a four-year old and an infant in a car seat, pictured below).

I don’t need to haul two tiny kids around anymore, but think of all the other stuff I could do with this bike: indulge in impulse purchases of giant wheels of Edam cheese, take a dingy from one canal to another, enlist my husband to cycle me home after a few too many La Trappe beers, etc.

Me and my beloved Bakfiets (File photo from our Cambridge days.)

And now I pass the swag bag torch onto the always entertaining and informative Bronwyn Joy at Journeys of the Fabulist! Visit her next week to see what she selects for her swag bag.

*Kathleen was a third culture kid and is now a third culture adult. How many days do you think you’d need to relocate your life from Russia? Whatever your estimate, I’m sure Kathleen did it faster. She’s written a memoir on her international life, Expat Alien (the book). You can see Kathleen’s swag bag post from last week here.

22 responses to “Swagging It”