I am thrilled to be moving back to Hong Kong this summer, but am dragging my feet over the task of physically preparing to move. So, instead of sorting through cupboards, checking the expiry labels on medicines or giving away old clothes, I have been happily reading Shannon Young’s memoir, Year of Fire Dragons.

I’ve known Shannon for several years now, but I’ve never before talked to her about first year in Hong Kong, the year she spent falling in love with the city while waiting to be reunited with her own love. She tells this story in Year of Fire Dragons and the way she writes about her first impressions of Hong Kong and the vibrancy of the city remind me of why I am happy to pack-up and move back only nine months after leaving. Shannon also provides fascinating insights into the local school system–she worked as a ‘Native English Teacher’ in a Kowloon-based school–and into an earlier age of expat life in Hong Kong as she includes colorful excerpts from her grandmother’s letters home during the 1950s.

Unfortunately I’ve now finished Year of Fire Dragons and the piles of paper on my desk still need to be sorted before the packers arrive. Two more memoirs of expats in Asia have been recommended to me, The Good Shufu and Here Comes the Sun, but for now I’d better keep them in reserve as post-packing incentives.

Want to know more? Read about all three books below and don’t miss the authors’ giveaway at the bottom of the post!

The Good Shufu: Finding Love, Self, & Home on the Far Side of the World

The Good Shufu is a true story of multicultural love, marriage, and mixups. When Tracy Slater, a highly independent American academic, falls head-over-heels in love with the least likely person in the world–a traditional Japanese salaryman who barely speaks English–she must choose between the existence she’d meticulously planned in the US and life as an illiterate housewife in Osaka. Rather than an ordinary travel memoir, this is a book about building a whole life in a language you don’t speak and a land you can barely navigate, and yet somehow finding a truer sense of home and meaning than ever before. A Summer ’15 Barnes & Noble Discover Great New Writers Selection, The Good Shufu is a celebration of the life least expected: messy, overwhelming, and deeply enriching in its complications.

Year of Fire Dragons: An American Woman’s Story of Coming of Age in Hong Kong 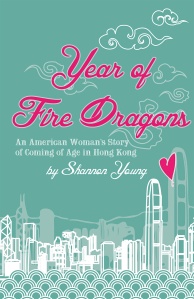 In 2010, bookish 22-year-old Shannon follows her Eurasian boyfriend to Hong Kong, eager to forge a new love story in his hometown. She thinks their long distance romance is over, but a month later his company sends him to London. Shannon embarks on a wide-eyed newcomer’s journey through Hong Kong—alone. She teaches in a local school as the only foreigner, explores Asia with other young expats, and discovers a family history of her own in Hong Kong. The city enchants her, forcing her to question her plans. Soon, she must make a choice between her new life and the love that first brought her to Asia.

Susan Blumberg-Kason, author of Good Chinese Wife, has called Year of Fire Dragons “a riveting coming of age story” and “a testament to the distance people will travel for love.”

Here Comes the Sun: A Journey to Adoption in 8 Chakras

At 30, Californian Leza Lowitz is single and traveling the world, which suits her just fine. Coming of age in Berkeley during the feminist revolution of the 1970s, she learned that marriage and family could wait. Or could they? When Leza moves to Japan and falls in love with a Japanese man, her heart opens in ways she never thought possible. But she’s still an outsider, and home is far away. Rather than struggle to fit in, she opens a yoga studio and makes a home for others. Then, at 44, Leza and her Japanese husband seek to adopt—in a country where bloodlines are paramount and family ties are almost feudal in their cultural importance. She travels to India to work on herself and back to California to deal with her past. Something is still not complete until she learns that when you give a little love to a child, you get the whole world in return. The author’s deep connection to yoga shows her that infertile does not mean inconceivable. By adapting and adopting, she transcends her struggles and embraces the joys of motherhood. “Here Comes the Sun proves that love is not bound by blood. I highly recommend it to anyone interested in that which connects us, holds us together, and makes us family.”—MC Yogi

Fancy a copy of all three books? You can enter the authors’ giveaway here:
Giveaway of three memoirs on love, life and finding home in Asia