Hong Kong carefully and constantly educates all of us seven million residents on how to live in a bunched up area without annoying each other to death. As a result there are many, many rule boards.

In the face of all of these restrictions, we Hong Kong residents do our best to comply.

We try not to smoke, but those who do smoke, only smoke where they are supposed to:

We use proper foot placement when on the escalator (unless we’re in a hurry and then the rule, by common consent, does not apply):

We keep our shoes on the floor and off of the toilet seat:

We appreciate rock formations, but only in groups of two or more: 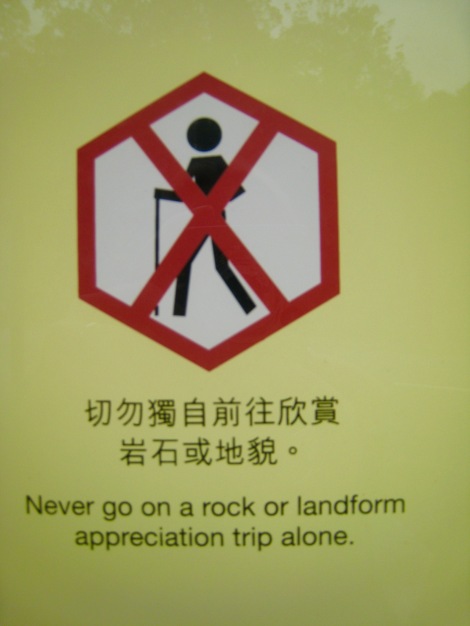 We refrain from urinating in public parks (well one or both of my young children might have broken this rule once or twice):

We do not frolic in designated “no frolicking” zones (well, I personally think this one is meant to be broken):

When someone breaks these rules (or rather, the ones we deem important), we immediately identify him as an “outsider” and shun him with our body language and icy stares.

One of the most important rules in Hong Kong is to allow passengers to exit the MTR (subway) car before boarding. This rule is announced repeatedly in three languages — Cantonese, Mandarin and English — throughout the MTR system. Arrows and lines are painted on the floors to further remind the populace of proper boarding etiquette. This is a rule that Hongkongers mutually agree must be followed to the letter.

So when I saw a group of four twenty-somethings waltz straight up to the MTR carriage doors, both cutting in front of many other queuing passengers and also blocking the exit of those wishing to get off of the MTR, I gave them my most hellish, demonic stare.

As we boarded the carriage, I chose a position close to them. Just who did these people think they were flaunting the sacred MTR rule? They were ethnically Asian, so at first I thought they were possibly mainland Chinese, but something about their body language wasn’t right. I scanned them more closely. Their clothes were terribly fashionable in an understated way, they had perfect hair and were all wearing sunglasses indoors. The man was wearing loafers without socks. Very likely not American then. Possibly Korean? This was my next guess solely because I have the general idea that Koreans are cool based on absolutely nothing.

I moved in even closer to identify their language.

Confirmation once again that no nationality has a monopoly on the production of oblivious tourists.

Visitors, if you’re going to break a Hong Kong rule, go frolic in the Nan Lian Gardens, but for God’s sake follow the MTR boarding rule. It’s the only thing that separates our civilization from complete anarchy.

29 responses to “One rule to rule them all”