Readers, are you curious as to why I wrote a story last week about a red minibus and a bunch of Hongkongers smashing overrated cookies? Read the interview below for for answers! (You can also read the original story here: Red Banner Sister Returns (with Doughnuts).)

What inspired you to write about a team of Hongkongers committed to smashing every macaron in the city?

While hunting for delicious and refreshing ice cream, we passed at least three different luxe shops selling overpriced macarons (HK $23 or US $3 for a cookie the size of a large coat button).

That day, dreaming of ice cream and listening to two tired children ask who had moved all the ice cream shops, I decided that I hate macarons and all that they stand for. And what do macarons stand for? High rents excluding all but luxury shops from once useful shopping centers.

That day I wanted to smash every macaron in the city, so I wrote about my fantasy. In the story I substituted chocolate cake doughnuts for ice cream because they are both season-less and more delicious. 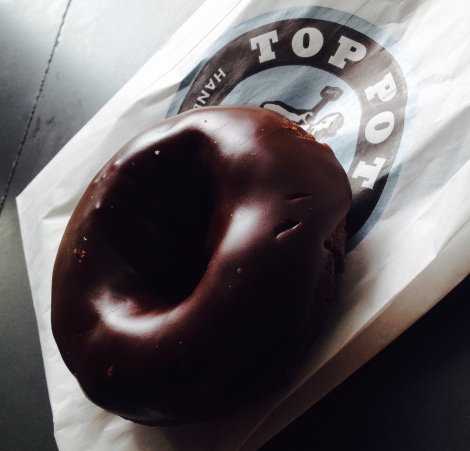 So did your children go without ice cream that day?

We did eventually find a small McDonald’s tucked away on an upper level of the IFC mall and made due with hot fudge sundaes (HK $7 or US $0.90). This particular McDonald’s location contains extremely cramped seating arrangements which must have been personally devised by the devil. The only way McDonald’s can afford the high mall rent, apparently, is by boxing in seating and cramming in as many patrons as possible. The three of us ate ice cream in yellow box number one.

What cozy ambiance! Photo via Open Rice here. The Open Rice poster’s comment translates as, “The new look is like a bunch of study carrels.”

Readers are very curious about why the central character, Red Banner Sister, spends the entire story driving a red minibus. Can you explain?

The story’s minibus setting was inspired by the Hong Kong film, The Midnight After, which I stumbled across on YouTube while pretending to study Cantonese. The film, released in 2014, is based on the online serial novel, Lost on a Red Minibus Going to Tai Po, by an anonymous Hong Kong writer known as Mr. Pizza. The book was brought to the screen by director Fruit Chan. (Neither of these names, Mr. Pizza nor Fruit Chan, are made up. This is completely factual.)

The film is about a minibus full of Hongkongers going from Mong Kok to Tai Po after midnight who suddenly discover that everyone else in Hong Kong is gone.

It slots into the sci-fi/horror category and the plot turns around questions such as:

Screen shot from The Midnight After

Because almost all of the action is set in Tai Po, the corner of Hong Kong where I live, I was giddy with excitement every time I spotted a road, bridge, building or sign that I recognized. It was as thrilling as the time in the 1980s when I watched Footloose and saw Kevin Bacon inside Utah’s Lehi Roller Mills and thought, “Hey, we drive by that place on the way to go camping!”

Is the film any good?

The premise pulls you in and the story has all sorts of tantalizing hints at interesting back stories. The film, however, is like the TV show Lost: lots of interesting mysteries that never amount to anything and are never explained.

If you are curious you can watch the trailer with English subtitles here.

Promotional shot from The Midnight After

Why would Red Banner Sister drive the minibus through the Central Harbour Tunnel when she is in a rush to get to Central?  Wouldn’t she use the Western Tunnel?

Well, the minibus in the film went from Mongkok to Tai Po via the Lion Rock Tunnel, so I also felt compelled to use Lion Rock Tunnel in the story. And once you take Lion Rock Tunnel from the New Territories to Kowloon, it’s only natural to take use the Central Harbour Tunnel to get to Hong Kong Island.

This route does require the suspension of disbelief as Red Banner Sister (and the doughnuts) would have certainly been stuck in a giant traffic jam and would have never made it to Hong Kong Island. 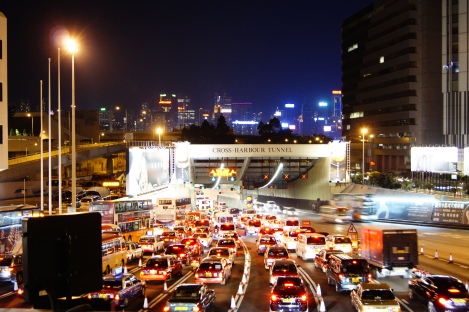 The traffic snarl that is the Central Harbour Tunnel. (Photo credit)

Thanks very much for explaining the thought process behind the story Red Banner Sister Returns (with doughnuts). Finally what can readers expect next?

Great question! That depends entirely on what major, minor and petty annoyance might pop up in my life. Current possibilities include:

4 responses to “Minibuses, macarons and answers”