My body lurched from side to side as the driver dodged and weaved around motorcycles, trucks and buses on the busy, narrow road heading away from Phnom Penh and toward the seaside town of Kep.

My nose smelt smoke, dust, exhaust and the sharp scent of children’s vomit.

My mind suddenly recalled something I heard Jim Carrey say as The Grinch while careening down Mt. Crumpit on a runaway sleigh to Whoville:

A short while earlier, in the backseat of the car, I had taken a break from studying the interesting mix of languages on the roadside advertisements (Cambodian, English, Chinese and occasionally French) and looked over at my daughter. Her ashen hue and grim expression told me that I urgently needed to dig a liquid-proof, plastic container out from my backpack to hold under her mouth.

Noticing the heaving sound from the backseat, the driver stopped so we could clean up a bit and give everyone some fresh air. Driving on, the road become no less busy and because the driver’s swerving style of driving continued, so did my daughter’s heavy car sickness. We stopped every ten kilometers or so to clean up, and eventually moved her to the front seat in hopes that a better vantage point would calm her stomach.

She seemed to settle and my husband and I relaxed a bit. 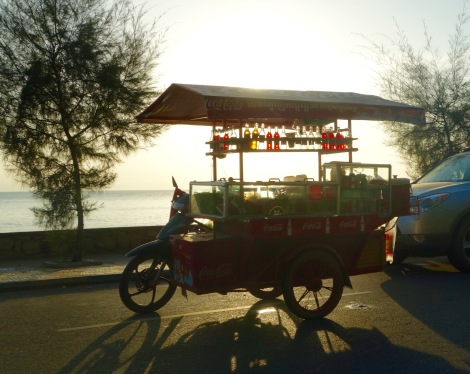 Carrying on through the dry paddy fields, I marveled at the colorful kites being flown and wondered how many hundreds of bright red advertisements for Angkor Beer and Cambodia Beer we had passed.

And then I heard a faint retching sound emerge from my son. He was not old enough to seek out a bag and his front and my left hand side were immediately saturated with sick.

Pulling over again, I sensed only the barest hint of annoyance from behind the gold-rimmed, aviator sunglasses that the Cambodian driver wore. He smiled and assured us it was all fine as I used tissues in an attempt to clean the cloth seats of his car.

From this point on, we left all of the car windows open to clear the air. We no longer stopped the car for sick children, but offered sick-bags and wiped chins while in motion. Our most urgent wish was to complete this car journey, shower and burn all of the sodden clothes we were wearing.

The setting sun was a perfect orange ball silhouetting palm trees and the wind blew through our hair as we came closer to the coast and passed salt production flats, Kampot pepper plantations and abandoned French colonial villas.

As the sea finally came into view, my children’s stomachs were completely empty and their weary blank stares revealed their utter exhaustion.

Arriving in the town of Kep, we four, pungent creatures emerged from the car, generously tipped the driver and took in our surroundings:

The sky was golden.

We had the sparkling Gulf of Thailand before us and the jungly Kep National Forest behind us.